The first day of a new college semester is filled with expectation. New classes, new teachers, new students and new friends. How about new bride?

I was starting my Junior year of college, my first day at Eastern Michigan University, and my first class was a 400 level history course, Age of Washington and Jefferson. I loved early American history, I wish I had the interest when I was in high school. Those were years, however, of mostly dozing through classes. But eight years was long enough to have nurtured a passion for many things ancient. Whether it concerned my home state of Michigan or country or civilization or universe, I found an enjoyment in reading about its birth and growth. And after two delightful years at tiny (600 member student body) Bryan College, a Christian liberal arts college in Dayton, Tennessee, where I specialized in generalities, I approached EMU with a major of History in mind. The classes I chose that first semester were predominantly history. Colonial American, European, Russian; I had already completed most core curriculum courses at Bryan. I looked with anticipation an in-depth study of the senior level subjects.

So, at two minutes to eight o'clock on the first day of school I walked into the aforementioned class and looked for a seat. Few of the desks were occupied. Whether this was due to the subject matter, the instructor, or the near pre-dawn time, I didn't know. But one of the first individuals my eyes spotted happened to be female. And quite lovely at that. With short dark hair, dressed in muted Fall colors, tan corduroy skirt half way covering tall brown leather boots with thick clunky heels, she was suddenly the only other presence in the room as far as I could see. I took a seat to her left with one row between us. I did not then look at her or give any indication that I noticed her, leaving her to suppose I hadn't even seen her. But I certainly had. I don't recall if I said anything to her that morning in class, though I may have greeted her at some point before Dr. Goff began the lecture. But I didn't think it prudent to let my imagination run amuck, twenty-seven years of life had cured me of getting ahead of myself where women were concerned. But I certainly was open to whatever communication I might encounter.

Her name was Melissa and she was in the wrong class. She had signed up for a first year history course and someone's input error assigned her to this fourth level class. She thought that instead of wasting precious time and energy explaining this to an admissions counselor and battling administrative monoliths she would give the class a try. She knew she was bright enough to handle it if it turned out it would interest her and she was plucky enough to try.

That first day of class with Dr. Goff showed promise. The instructor's teaching style would be one I could appreciate though I think I was in the minority. With frequent rolling of his eyes out of a seemingly unconscious habit he lectured with a calculated but in-depth patter belying an guileless innocence indicating this wouldn't be a run-of-the-mill lecture course. He exuded a very dry sense of humor. Indeed, I can imagine that most of the students in that class were insensible of those occasional demonstrations of wit. But there were at the very least two who did, myself and a certain student two desks away. The first hour passed quickly. The bell rang, I looked up after gathering my things and she was gone.

I proceeded to the Student Union, to get acquainted with the bookstore. Eastern had a comfortably large campus of about 20,000 students and is located a few miles east of the more superior and ancient University of Michigan, and layout was compact and was enjoyable to walk around. It was a glorious day, comfortable jacket weather I believe, and the long walk was enjoyable. Not a few students were appreciating the rising sun on that clear day and I remember passing a young woman sitting at a table outside the Union and smiled at her as we nodded a quiet greeting to each other. It was her though I didn't realize it at the time. I continued on my way content in knowing that tomorrow would be another day of opportunity.

The days turned into weeks and the semester progressed. And we did, albeit slowly, begin to interact. She told me her name confiding that she didn't overly care for it, and I attempted a short conviction that it was a very nice name. Over time we came to know each other bit by bit. I don't think either of us got to know any of the other handful of people in the class. We discovered some mutual interests like music. We both played the guitar and enjoyed singing. She even indicated she wrote a little, and would shortly give me a cassette tape she had recorded. Her voice, guitar and music.

While I didn't pursue dating her, she pondered how she might be able to move our friendship up a level, as in share time together outside of class. Melissa thought to covertly investigate how she might contact me, particularly by phone. Maybe she would ask me out on a date, or invite me over for dinner. But finding only frustration in the phone book, though she did call almost every Schneider in the listings, probably even reaching my brother Bill without realizing it who was living in Ypsilanti then, she would have to be patient. I lived in the area but shared an apartment with an acquaintance from church. My address of residence was the home of my parents 17 miles away in Inkster.

Her patience bore fruit after a few weeks when a friend from church came into class before the lecture started. He needed to call me regarding some musical event or something for church and asked for my phone number. When I rattled it off for him Melissa wrote it down. Not long after that on one evening I was in the apartment listening to the tape Melissa gave me. The phone rang. When I answered she could here her voice in the background on the tape which was still running. It was an eerie feeling for her she told me later. And she did want to ask me out to dinner. Actually it turned out it would be in for dinner. She exiled her roommate for the evening and made a fabulous meal for me. It was my introduction to the culinary skill she possessed. It was a delightful evening. I brought my guitar over and we passed a marvelous time eating and singing and talking. The relationship definitely moved up a notch.

After that we started to see each other more often, frequently studying together at school. Our favorite place was an open lounge type area on the second floor of the Student Union. It usually was quiet after hours when the offices located on that floor closed and if none of the ballrooms were occupied. But we would be just friends, though very good friends.

Early in our friendship while walking from class to the library I asked her a typical evangelistic question, "If you died tonight do you know for certain if you would end up in heaven?" She told me that she was too busy being embattled by the present to think about that future. She mentioned one of the largest wars raging at the time and that was the mother-daughter war. It's not appropriate to open those pages now, her mother died a few years ago, in June of 1996. Suffice it to say the relationship was strained. The way Melissa put it that afternoon was, "If my mother could live here," pointing down her throat, "she would." Suffocating would sum it up. I thought at the time she was exaggerating. I would come to learn differently. In spite of that she did think about what I had said. She will have to be the one to describe how those thought processes would weave their way through her mind and heart, but some time that next spring, she asked me where she could be baptized. Now that was a thrilling question.

I only wish that the pastor of my own church thought so too. Briefly, when I asked about the use of the baptistery at First Baptist Church of Wayne I was told that they couldn't just fill up the entire tub with water for one person. This isn't the place to enter the theological or sociological implications for such a statement by a pastor, though it's not hard to detect the irony here. We found a church closer to her home, and upon a profession of faith in Jesus Christ as her Lord and Savior Melissa was baptized at the Huron Hills Baptist Church. This was the church, though, where she was snubbed after a service in which she initially professed her faith. After an "alter call" the pastor mentioned to those who had come forth proclaiming their need and their faith, and she approached him citing a desire to talk about what had happened to her. This new born Christian was told to call him during the week to set up an appointment. It was not as if hoards of the flock were pressing upon him at that very moment. Well, I can only imagine the life of a pastor must be a brutal one.

But that is all an aside. Melissa and I continued our friendship and with her being recently saved, we grew more close. Some beautiful music was realized as we composed a song together, "Night To Day." She gave me the melody to which I found words to adorn. Upon reflection it seems a fitting epitaph for our relationship and life up to that point. On several levels both our lives had changed in just such a way, emotionally and spiritually. The difference was as night and day. Out of darkness into light. From coldness to brilliant warmth. In a poem she wrote to me Melissa used these words, 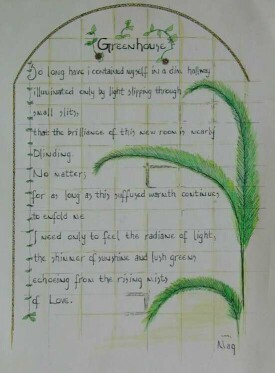